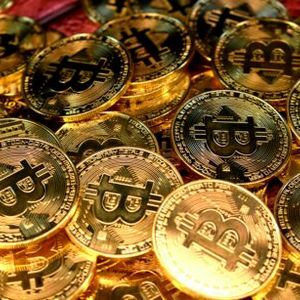 On-chain data shows Bitcoin holders have done some rapid fresh accumulation recently, something that may lead to bottom formation for the cycle. Bitcoin 1w-1m Realized Cap UTXO Age Bands Have Sharply Gone Up As pointed out by an analyst in a CryptoQuant post, the percentage of the BTC realized cap that was last moved between 1 week to 1 month ago has displayed rapid uptrend for the first time in this bear. The “realized cap” is a Bitcoin capitalization model that values each coin in the circulating supply using the price at which it was last moved. The metric then calculates the “true valuation” of BTC by summing up all these values of the individual coins. This is different from the normal market cap, where every coin in circulation has the same one value; the current Bitcoin price. The “realized cap – UTXO age bands” is an indicator that tells us the distribution of the realized cap of each age band in the market. These age bands specify ranges between which UTXOs (or more simply, coins) falling into said age band were last moved. Related Reading: Glassnode: Bitcoin Holders Realized 14x More Losses Than Profits Recently The relevant age band here is the 1w-1m group, which includes all UTXOs that were last moved within 1 week to 1 month ago. Here is a chart that shows how the percentage of the realized cap contributed by this age band has changed over the years: Looks like the value of the metric has sharply gone up in recent weeks | Source: CryptoQuant As you can see in the above graph, the realized cap of the 1w-1m Bitcoin UTXO age band has observed some rapid uptrend recently. The older end of this range, that is, one month ago, is around when the crash due to the FTX collapse took place. Related Reading: Bitcoin Investor Cohorts Now Have Close Cost-Basis, What Does It Say About Market? The indicator’s value rising thus suggests that investors have done some fresh accumulation at the lows following this crash. This is the first time in this Bitcoin bear market that such rapid new accumulation has taken place. From the chart, it’s apparent that such rises have historically coincided with cyclical lows in the price. Another interesting thing to note is that between these spikes in the metric during the previous two cycles, there were 1358 days. The current rise has come 1444 days after the last one, which is a similar length as the gap before. If there really is a pattern here, then the Bitcoin bottom may be very close, if not already in. BTC Price At the time of writing, Bitcoin’s price floats around $16.8k, down 1% in the last week. BTC plunges down | Source: BTCUSD on TradingView Featured image from Kanchanara on Unsplash.com, charts from TradingView.com, CryptoQuant.com

Get Crypto Newsletter
Market Cap
24h Vol
42.05%
Bitcoin Share
15
Today News
Read the Disclaimer : All content provided herein our website, hyperlinked sites, associated applications, forums, blogs, social media accounts and other platforms (“Site”) is for your general information only, procured from third party sources. We make no warranties of any kind in relation to our content, including but not limited to accuracy and updatedness. No part of the content that we provide constitutes financial advice, legal advice or any other form of advice meant for your specific reliance for any purpose. Any use or reliance on our content is solely at your own risk and discretion. You should conduct your own research, review, analyse and verify our content before relying on them. Trading is a highly risky activity that can lead to major losses, please therefore consult your financial advisor before making any decision. No content on our Site is meant to be a solicitation or offer.